Today psychology is developing not only as an important theoretical discipline, but also as a domain of special practical activity which is required everywhere, especially where human activity needs to be improved. Psychological aid is required in activities performed in unusual, or so to speak, extreme conditions such as information overload, sensory and social isolation, sea depth, rescue and test works, war, firefighting etc. No doubt, important sport competitions are also in this list.

It’s hard to imagine sport in general and sport of setting efforts, in particular, without cruel competitive battle. Competitions require the mobilization of the whole gymnast’s strength – physical and psychological, moreover, psychological strength is even more important.

Such responsible thing like competition makes the gymnast to feel the whole variety of emotions - from the absolute confidence in her strength to panic fear and unwillingness to go to the start, and it doesn’t depend on gymnast’s experience.

Even a professional rhythmic gymnast sometimes can’t calm her nerves at the right moment, relax and ease unnecessary tension. In such situation there’s a risk of “psychological breakdown”.

However, not only anxiety and negative emotions can interfere in championship. Very often gymnast can lose because of yielding to the joy of victory.

Let’s study what happens to the gymnast at the moment when she steps on the carpet and it’ll be clear why competitions are in the list of the activities in extreme conditions. Contemporary rhythmic gymnastics, especially gymnastics of setting efforts, is impossible without load of maximal intensity and volume, the hottest sport contest, close competition, constant feelings of success or fail, which cause stress or anxiety.

Issues of psychological stress and anxiety in sport were actively developed after the Concepts of biological stress were spread (Walter Cannon, Hans Selye, Ivan Pavlov). Since then stress is supposed to be a feeling which appears in the human organism under the influence of various psychological and emotionally important for a human irritants. 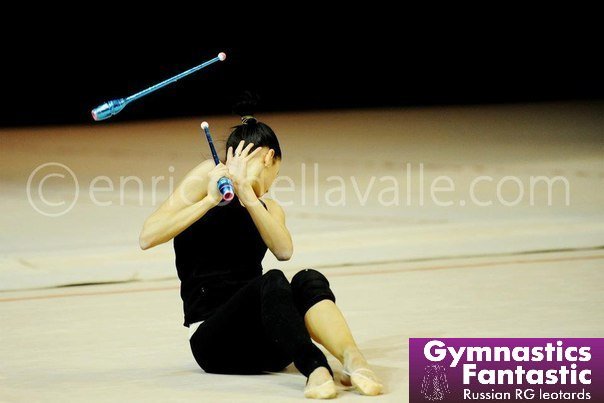 According to Stockfelt, the situations of waiting evaluation on person’s activity by the others are stressful. It’s necessary to mention that stress also causes anxiety which gymnast feel stepping on the carpet.

We should always remember about the connection between emotional tension and activation of sympathoadrenal system. L. Modian first (1957), then A. Viru (1969) and S.Razumov (1970) proved that physical exercises, especially in the conditions of competitions, leads to increase of endocrine excretion, adrenal cortex in particular, which defines the adrenalin, noradrenaline and catecholamine raise.

Walter Cannon proved that adrenalin is the anxiety hormone. It gives signals to the working body parts about necessary change in their activity, influencing on biochemical processes in cells. But if adrenalin raises to the noradrenaline, the state of starting apathy. The amount of adrenalin in the blood is smaller, that the amount of noradrenaline when the gymnast feels battle readiness. Adrenergic influence contact with all the functional systems - central nervous system, breathing system, blood system, eliminative system, digestion, sensory and muscular systems. Stressful, isn’t it?

Being a specialist at the Moscow Institute of Physical Training V.Silin did a research on 10 rhythmic gymnasts of Team Russia. The results were the following: heart rate of the gymnast preparing to step on the carpet can increase till 144 beat per minute (depends on competition status); shivering (results of 3 tests) can be 10.5 at rest and 22.0 at the start; coordination (mistakes quantity) 2.6 at rest and till 4.6 at the start; temporal pressure after one and a half minute performance increases from 60 till 120 millimeters of mercury. 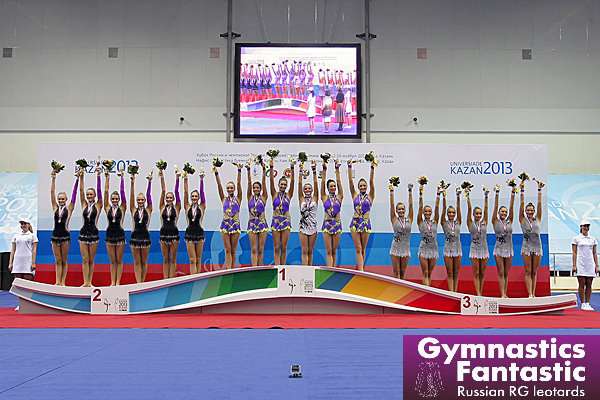 It is pertinent to note that all the gymnast’s above mentioned scores become normal again in 10-15 minutes after the competitions, however, less skillful gymnasts can’t “recover”. That only proves how important  and necessary the psychological training is in rhythmic gymnastics, especially for young gymnasts at the age of 10-13.

At the competitions rhythmic gymnasts usually perform in 6 different programs, and they have to start many times. Technique and difficulty of the exercise has been lately increased. The only criterion of gymnast’s skill is the judges’ grade. Atmosphere is always new at the competitions, though it’s familiar (judge, audience, carpet, competitor, favourite and unpopular apparatus). Physical load at the competitions is not great, however, estimating competition activity it’s necessary to  take into consideration both physical and psychological load, mental tension which is regularly felt by the gymnasts and that can lead to the bad mistakes in compositions.

Besides insufficient skills in physical training and rhythmic gymnastics technique, lack of confidence, caused by unlucky drawing, inability to concentrate, inattention, noise in the gym, shouting audience, unbalanced judging can also get in the way of successful performance. Faults can be caused by mental instability, maladjustment to extreme conditions, inability to overcome obstacles, which gymnasts can come across during the preparation for competitions or in the competition process.

Sudden hindrance can be bad feeling, fear to get injured, long judges discussion about the grades, imaginary judges’ favor, audience stormy reaction, etc. gymnast should be ready exactly to these situations.

Secret of Turn in Rhythmic Gymnastics